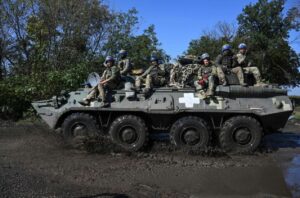 “Some cheered, but some people were not happy to see us,” says a Ukrainian special forces soldier. A report says that western weapons and diversionary tactics helped Ukrainian forces take back 1,000 square miles of land in the northeast of their country. While Ukrainian soldiers have reported being swamped by happy people in freed districts, […]

The post Ukrainians Mentally Not Ready To Being Part Of Ukraine Anymore appeared first on Revyuh.

September 25, 2022
According to the official legal information portal, President Vladimir Putin has approved changes to the law to Russia’s Criminal Code under which military members who