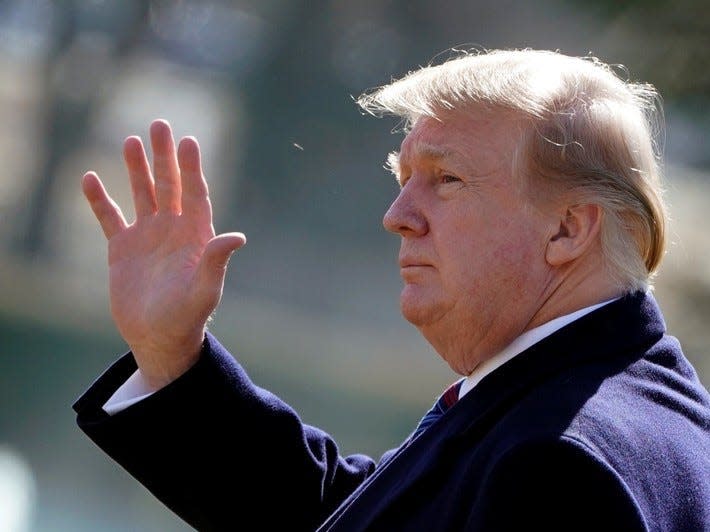 Former President Donald Trump skipped anesthesia for a previously-unreported 2019 colonoscopy at Walter Reed National Military Medical Center so he wouldn’t have to temporarily relinquish his presidential powers, according to The New York Times.

Trump puzzled reporters with a mysterious, unscheduled November 2019 visit to Walter Reed, adding to the confusion by claiming the appointment was the first part of his routine annual physical, which is normally done in just one appointment.

Stephanie Grisham, a former White House press secretary and chief of staff to Melania Trump, sheds new light on the episode and suggests that the trip was just for a regular colonoscopy. Her memoir “I’ll Take Your Questions Now,” set for publication October 5, was obtained by the Washington Post and The Times ahead of publication.

Grisham, without naming the cause of the visit, described it as being for “a very common procedure” for which “a patient is sometimes put under” – and said that former President George W. Bush had one as president.

Bush, who underwent a colonoscopy in 2007, temporarily signed over the powers of the presidency to then-Vice President Dick Cheney.

But Trump, Grisham wrote, was so reluctant to hand over those presidential powers to Vice President Mike Pence that he underwent the procedure without anesthesia, per The Times, with Grisham saying that Trump didn’t want to be “the butt of a joke” of TV comedians.

Grisham wrote that Trump could have used the procedure to spread awareness and educate Americans about the importance of routine colonoscopies. “But as with covid, he was too wrapped up in his own ego and his own delusions about his invincibility,” she wrote, according to the Post.

“Stephanie didn’t have what it takes and that was obvious from the beginning,” the former president said in a statement on Tuesday.

Melania’s post-White House office released a harsh statement of its own two weeks ago as initial leaks about the book began to emerge.

“It is an attempt to redeem herself after a poor performance as press secretary, failed personal relationships, and unprofessional behavior in the White House,” the statement said of Grisham. “Through mistruth and betrayal, she seeks to gain relevance and money at the expense of Mrs. Trump.”

In the growing canon of Trump White House tell-alls, Grisham’s account has the potential for unique revelations given her proximity to the notoriously secretive former first lady.

“Stephanie has secrets about Trump that even the first lady doesn’t know,” a publishing industry source told Politico earlier this month. “Secrets that he doesn’t want her to know. They will be in this book.”