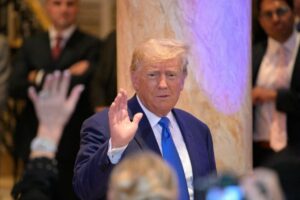 Former US President Donald Trump’s unblocked Twitter account is fast gaining followers, with 1.3 million new followers appearing in just 40 minutes. Trump’s account was suspended by Twitter last year after the events at the US Capitol on January 6, 2021, but it was reinstated on Saturday. Elon Musk, a billionaire entrepreneur, said on Twitter […]

The post The @realDonaldTrump Is Back With 1.3 Million New Followers appeared first on Revyuh.