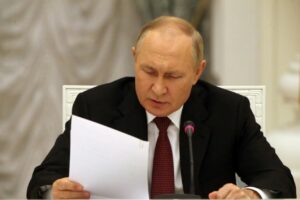 According to the official legal information portal, President Vladimir Putin has approved changes to the law to Russia’s Criminal Code under which military members who refuse to obey a senior officer’s order during martial law or to engage in combat will receive a prison sentence of up to three years, and if the refusal results […]

The post Soldiers Who Refuse To Go To War May Face A Jail Term Up To 10 Years – Russia’s New Criminal Code appeared first on Revyuh.