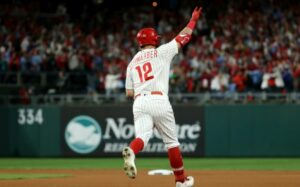 Kyle Schwarber belted another home run as the Philadelphia Phillies defeated the San Diego Padres 4-2 to take a 2-1 lead in their Major League Baseball playoff series on Friday. After being outgunned by San Diego in an 8-5 game two loss in California on Wednesday, Philadelphia bounced back superbly in front of their home […]