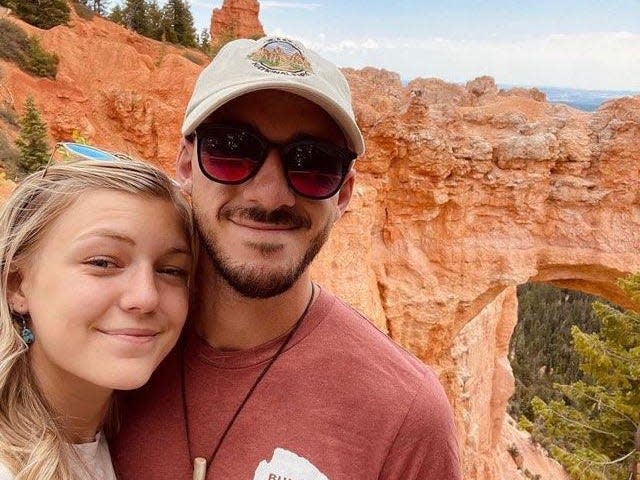 The family of Gabby Petito blasted her boyfriend on Wednesday, saying his “silence” was “reprehensible” and accusing him of leaving Petito “in the wilderness with grizzly bears and wolves while he sits in the comfort of his home.”

Petito’s family released the statement through their lawyer, Richard Stafford, shortly after the police in Florida declared her boyfriend, Brian Laundrie, a person of interest in her mysterious disappearance.

Petito, 22, was reported missing by her family in New York on Saturday. She and Laundrie had set out on a cross-country road trip from the Empire State in a converted van in early July. Her last known location is believed to be in Wyoming’s Grand Teton National Park.

The police have said that Laundrie, who returned home alone to Florida with the van 10 days before Petito was reported missing, has refused to be interviewed by investigators.

“Everyday the search for Gabby continues the Schmidt and Petito family becomes more desperate,” the statement from Stafford said. “They are frantically searching for answers and information in their daughter’s disappearance while Brian sits in the comfort of his home.”

“Brian, how could you do this to Gabby? You selfishly remain silent while Gabby is all alone in the wilderness,” it added. “Brian, your silence is reprehensible! We beg you to do the right thing and help us bring Gabby home.”

It went on: “Brian, whatever happened in Wyoming, happened. The only thing you can control is what you do now. Tell us where Gabby is. You tarnish [your] love for her with your silence.”

A lawyer for Laundrie, Steven Bertolino, released a statement on Tuesday.

“This is understandably an extremely difficult time for both the Petito family and the Laundrie family,” the statement said. “On the advice of counsel, the Laundrie family is remaining in the background at this juncture and will have no further comment.”

Bertolino did not immediately respond to Insider’s requests for comment on Wednesday.

Meanwhile, Petito’s stepfather and a close family friend have gone to Wyoming to search for the young woman, Stafford told Insider earlier Wednesday.

Stafford also told Insider earlier Wednesday that Petito “worked real hard” to save up enough cash so she could go on the adventurous trip with Laundrie only for it to end with her disappearance.

“She worked real hard to save her money and to go on this trip of a lifetime,” said Stafford, who described Petito as a “free spirit.”

“She was a very wonderful, loving girl,” Stafford said. “Everyone that knew Gabby liked Gabby. She was always around to help anybody out that needed help.”

Read the original article on Insider