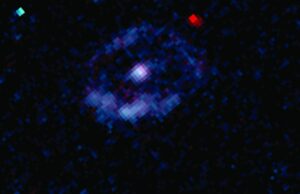 When an unlucky star went too close to an intermediate-mass black hole lurking undiscovered in a dwarf galaxy, it revealed itself to astronomers. The shredding of the star, known as a “tidal disruption event” or TDE, caused a radiation flare that briefly outshone the combined stellar brightness of the dwarf galaxy’s host and could help […]

The post Midsize Black Hole Lurking In A Dwarf Galaxy Detected As It Began To Eat The Star appeared first on Revyuh.