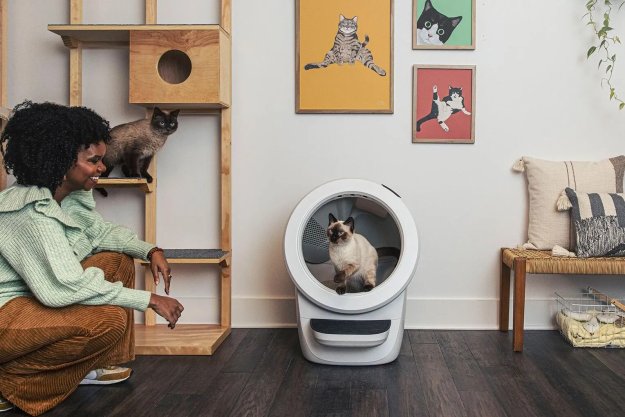 “The Litter Robot 4 eliminates the need for a pooper-scooper since it handles that unpleasant task for you while also monitoring weight, usage frequency, and more.”

Have you ever considered the potential utility of a Wi-Fi-enabled, smart litter box? I hadn’t, but now that I’ve used the Litter Robot 4, I can’t imagine another way. You don’t realize how much time is spent scooping out a litter box until you don’t have to do it anymore.

It’s not a pleasant job. It stinks, dust flies everywhere, and your cat is utterly unappreciative of all the effort you put into giving her a good life. The Litter Robot 4 not only automatically scoops itself out, but it also bags up the remains in an odor-proof drawer for easy disposal later.

It’s a fantastic device, albeit a bit on the pricey side. Whisker sent the latest model to me to try out, and it’s been great — in theory. In practice, my cat used it twice, noticed the rotating of the drum, and then refused to go anywhere near the Litter Robot again. There’s nothing in any reviewer guide about how to get a cat to cooperate, although Whisker does include instructions for introducing your cat to the litter box.

The Litter Robot 4 has an interesting design. There’s a small step in the front that your cat will need to use to climb into the litter box, and that might be off-putting to some animals. It serves a purpose, though: the step is actually a scale.

The litter box itself is more of a dome, and it can look a bit smaller than some litter boxes. My cat is a larger girl, and she had to get accustomed to the smaller size. There’s a plastic tarp-like material at the bottom that the litter goes on top of, too.

The Litter Robot 4 isn’t small, so make sure you leave enough room for it in your home. With dimensions of 22 inches by 27 inches, it can’t be tucked away under a table or hidden. The good news is that it does a great job of blocking out odor, so you don’t have to worry about stinking up your house.

The litter box definitely has a premium feel to it that matches its $700 price tag.

A litter of features

It’s hard to nail down any specific features I could ask for in a smart litter box. It’s just not something you often think about. The main appeal, obviously, is that it’s self-cleaning; it does this by rotating the main drum and filtering the clean litter through a mesh. Any clumps and other matter are left on top of the mesh and then dumped through a hole into a bagged container in the bottom of the Litter Robot.

It works well, and it only takes a few seconds to clean the litter box. Sensors embedded within the waste container send alerts through the Whisker app, letting me know when it’s time to empty it out or when the litter is low.

There’s also a light just under the rim that lets you see at a glance whether your cat is in the box or not. As I mentioned earlier, the step also has a scale in it, and that has been a useful tool.

I started my cat on a diet food just before the Litter Robot 4 arrived, but I couldn’t tell whether it worked. Over the first few days, each time she stepped up into the box, it recorded her weight in the app. Little by little, I watched as she dropped a 10th of a pound at a time.

Sensors in the drum detect the presence of your cat and prevent the Litter Robot from activating, so there’s no worry that it will empty the litter while your cat is inside. This sensor is actually quite sensitive; you can tell when it’s active because the light atop the Litter Robot turns red.

If you’re trying to keep an eye on how often your cat uses the bathroom, the app can help.

There’s a control panel on top of the drum that can be used to manually cycle the litter, but the app also gives easy controls. Most of the work is done automatically, and you only need to intervene when it’s time to refill the litter or empty the waste tray. There’s also an internal filter that should be swapped out every two to three weeks.

The app tells you how often your cat is detected, and how often the box has cycled. If you’re trying to keep an eye on how often your cat uses the bathroom, this is a particularly useful trait. After all, cats are notoriously good at hiding symptoms of illness.

You can download the device history from the app and bring it with you to the vet to help identify any patterns. Paired with a diagnostic cat litter, the Litter Robot can be a phenomenal tool for spotting health problems before they worsen.

It’s a well-known fact that cats are divas. They know they’re fabulous, and they expect everyone else to treat them as such — even when we know they’re derps at heart.

I love the concept of the Litter Robot, and I think it’s a fantastic device that works great. I just haven’t figured out how to convince my cat that she won’t be eaten if she steps into it.

The lack of a clean litter box is one of the main causes of feline misbehavior, but the Litter Robot 4 nicely handles that issue. In fact, if your cats get along, multiple cats can use the same Litter Robot without issue.

With a single cat, most people will need to empty out the waste drawer about once a week. That frequency will increase with the number of cats using the Litter Robot.

I love the concept of the Litter Robot, and I think it’s a fantastic device that works great. I just haven’t figured out how to convince my cat that she won’t be eaten if she steps into it. Once I do, I will relish the lack of litter box odor and that I won’t have to scoop litter every single night before bed. It kind of kills the whole relaxation vibe I have going.

The major downside to the Litter Robot 4 is the price. At $699, it’s definitely not an impulse purchase, but Whisker does help offset the cost by offering a 90-day in-home trial. It also includes a one-year warranty for free, with a three-year warranty for an extra $100.

If you’re a cat lover, then I would wholly recommend the Litter Robot 4. It will save you a lot of time and help keep your home a bit cleaner, especially since cats typically face outwards when using it — and as such, they don’t fling litter out of the box like it’s confetti on New Years’ Eve, 1999.