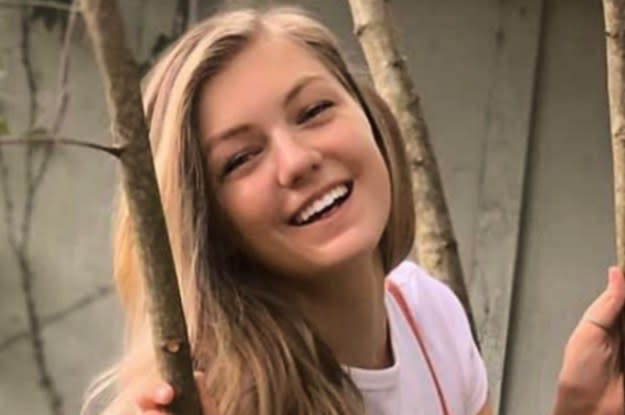 Investigators said they found a body Sunday in the Bridger-Teton National Forest that they believe is 22-year-old Gabrielle Petito, the #VanLife influencer who went missing while on a cross-country road trip with her fiancé.

A deputy coroner responded to the area Sunday afternoon, Teton County Coroner Brent Blue told BuzzFeed News. During a press conference about the discovery, the FBI’s Charles Jones said while they cannot confirm “100%” pending a full forensic test, the body was “consistent with the descriptions of” Petito.

The North Port Police Department in Florida tweeted Sunday that they are “saddened and heartbroken to learn that Gabby has been found deceased” following the FBI announcement. “Our focus from the start, along with the FBI, and national partners, has been to bring her home. We will continue to work with the FBI in the search for more answers,” they added.

Petito was reported missing Sept. 11 and had last been seen near the national forest in Grand Teton National Park in Wyoming. Her family said the final week of August was when they were last in contact with her.

Petito’s fiancé, Brian Laundrie, returned home to North Port without her Sept. 1, driving her white van in which they had road-tripped across the country while vlogging to hundreds of thousands of followers on social media. The Suffolk County Police Department in New York, where Petito’s family is based, said Laundrie made no attempt to reach them to help find his fiancé. Last week, Laundrie was officially named by police as a person of interest.

However, as of Friday, his whereabouts are unknown. “The family now claims that they have not seen Brian since Tuesday of this week,” North Port police said in a statement on Twitter.

The couple had been sharing their trip for months across the western US on Instagram and YouTube. Petito last uploaded a video Aug. 19.

While police in various jurisdictions of their trip are still investigating what happened, the Moab City Police Department in Utah was called Aug. 12 about a potential domestic dispute between Petito and Laundrie. According to the police report, Petito was found “crying uncontrollably,” and police body camera footage showed officers discussing whether Petito should be charged for hitting Laundrie.

“Both the male and the female reported they are in love and engaged to be married and desperately didn’t wish to see anyone charged with a crime,” the report said. No charges were filed then, as Moab City officers called it a “mental health crisis.”

The searches for the couple were heavily sensationalized online, especially on TikTok. Posts from people alleging to have made contact with Laundrie or Petito have gone massively viral and are now being seriously investigated by police. The case’s lingering questions have also led TikTok users to conjecture openly about what might have happened, sometimes even sharing unfounded conspiracy theories.

The FBI is continuing to encourage anyone with credible tips and information to come forward — especially from those who were near the Spread Creek camping area between Aug. 27 and Aug. 30 and may have had contact with the couple or seen their van.

As the body was recovered in Wyoming, officials continued their search for Laundrie, focusing their efforts in the Carlton Reserve, a sprawling 25,000-acre park in Sarasota County, Florida. His family attorney claims he was last seen Tuesday.

Richard Stafford, an attorney representing the Petito family, told CNN last week that “all of Gabby’s family want the world to know that Brian is not missing, he is hiding.”

Stafford did not immediately return a BuzzFeed News request for comment Sunday.