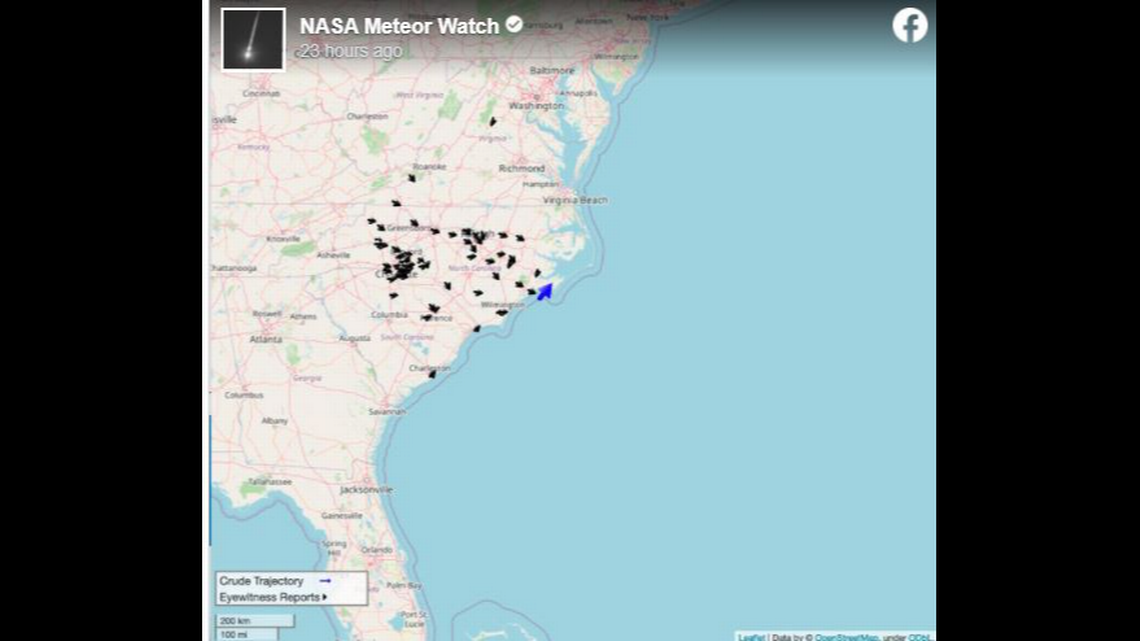 A fireball that soared over the North Carolina coast Friday was seen blazing through the sky across the state.

NASA Meteor Watch said the fireball — which is an “exceptionally bright” meteor — “skimmed the coast of North Carolina” around 7:40 p.m. and became “visible 48 miles above the ocean off Camp Lejeune.” It was one of five fireballs reportedly seen over the United States that night, according to NASA.

More than 100 people reported seeing the fireball over North Carolina, according to the American Meteor Society.

The reports came in across North Carolina — including from people hundreds of miles away from the coast in the western part of the state. Some people reported seeing the fireball in South Carolina.

It was also seen in central North Carolina, where a video taken about 15 miles south of Raleigh and posted by the American Meteor Society captured the fireball lighting up the sky.

NASA estimates the fireball traveled northeast at 32,000 mph and that it disintegrated 28 miles over Morehead City, North Carolina, after “traveling 26 miles through Earth’s upper atmosphere.” But it said there is “more than the usual amount of uncertainty in the trajectory solution due to all the observers being located to the west of the fireball.”

Fireballs, also called shooting stars, are “spectacular enough to be seen over a very wide area,” NASA said. While they are sometimes seen by “ground-based observers” at night, it’s much more rare to seen them during the day.

Meteors and fireballs are the “visible paths” of meteoroids — which are asteroid or comet fragments that orbit the sun — that have “entered the Earth’s atmosphere at high velocities,” according to NASA.

The meteoroids that cause fireballs are usually too small to stay in one piece while going through the Earth’s atmosphere, NASA said, but their fragments are sometimes found on the ground.

Is NASA tracking all the asteroids that could hit Earth? Well, not exactly, it admits

How did the ‘Corn Moon’ get its name? Get ready for summer’s last full moon

Not sleeping well? It may be the moon’s fault — especially for men, study finds