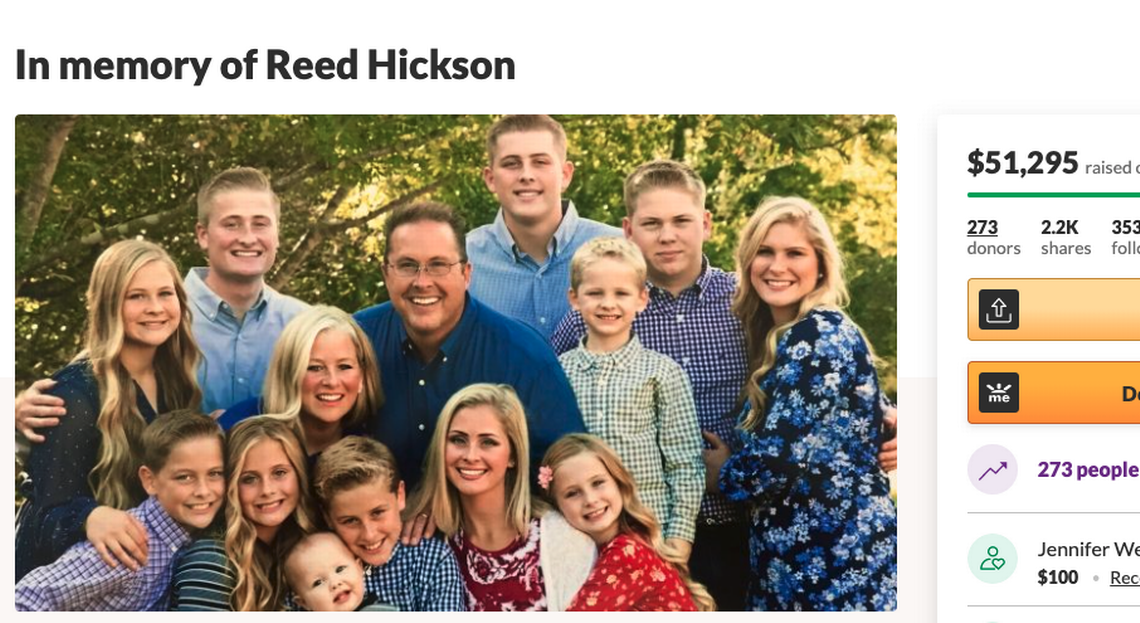 A day after a wife’s public plea to help find her husband an ECMO machine to save his life, a Texas father died of COVID-19.

Reed Hickson, a 49-year-old father of 12 from College Station, died Monday. He is among the nearly 63,000 people who have died from the virus in Texas, according to New York Times data.

“My little brother Reed was called home last night, leaving behind a legacy of true love and greatness, his family of 12 beautiful children and his magnificent soul mate,” Samuel Hickson said on Facebook Tuesday of his brother.

Gina Robnett Hickson, Reed Hickson’s wife of 29 years, said Sunday he was in need of a hospital bed with ECMO capabilities.

ECMO, or extracorporeal membrane oxygenation, machines are in limited supply in many parts of the country, McClatchy News reported. The machines work as a last resort procedure against the virus by replacing the function of the heart and lungs by sucking blood out of the body, pushing it through an artificial lung that feeds it oxygen, then returning it to the heart.

“He stayed stable for a couple of days and then he was starting to steadily decline. We had, I cannot tell you how many people trying to save his life and trying to get an ECMO machine, a hospital that had a bed with one,” Gina Robnett Hickson told KTBX.

Family friend Dr. Andy Wilson told the TV station they looked to Arizona, Nevada, Oklahoma and Florida to find the machine before he died Monday. Only some hospitals are equipped to carry ECMO machines, as they require a specially trained team of health care workers, McClatchy News reported.

Reed Hickson’s bout with COVID-19 began around a month ago and included a 10-day stay in the hospital and two additional admittances to the ICU, his wife said. Most of the family also caught the virus but had mild forms, she told KTBX.

Putting the patriarch of the family on a ventilator “was his only chance to stay alive,” the wife said on Facebook a day before his death. It’s unclear if the father was vaccinated.

Reed Hickson, a Texas A&M graduate who worked for the past 10 years at MHSC Energy, leaves behind 12 children: Cayla, Mason, Leiah, Connor, Reece, Lily, Morgan, Lance, Chase, Hensley, Casen and Ryker, according to a GoFundMe.

“I’ll never forget Gina bringing Reed to our senior prom and us all thinking they were a real life Ken and Barbie,” said Gina Hickson’s best friend, Kristi Deatherage Johnson. “Gina married him that summer.”

A high school classmate of Reed Hickson remembered him as “a very kind person that always had a big smile to lend to everyone.”

‘One of a kind’ 4-year-old dies of COVID within day of showing symptoms, Texas mom says