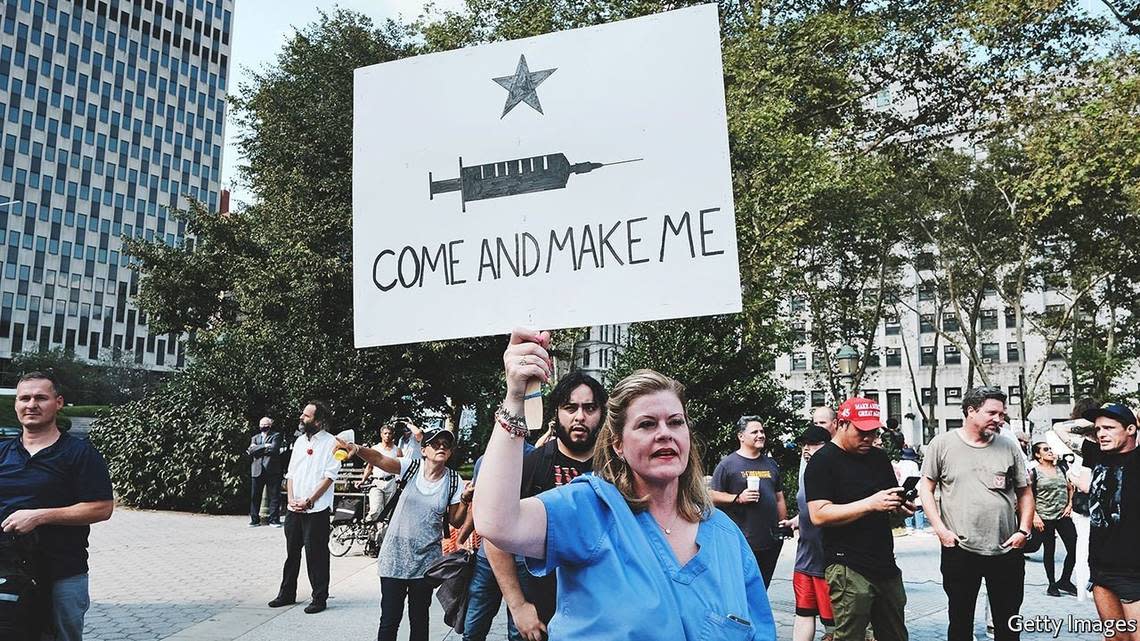 “If you want to leave, take good care, hope you make a lot of nice friends out there”

— from “Wild World” by Cat Stevens

This is for those of you who’ve chosen to quit your jobs rather than submit to a vaccine mandate.

No telling how many of you there actually are, but lately, you’re all over the news. Just last week, a nearly-30-year veteran of the San Jose Police Department surrendered his badge rather than comply with the city’s requirement that all employees be inoculated against COVID-19. He joins an Army lieutenant colonel, some airline employees, a Major League Baseball executive, the choral director of the San Francisco Symphony, workers at the tax collector’s office in Orange County, Florida, and, incredibly, dozens of healthcare professionals.

Well, on behalf of the rest of us, the ones who miss concerts, restaurants and other people’s faces, the ones who are sick and tired of living in pandemic times, here’s a word of response to you quitters: Goodbye.

Not to minimize any of this. A few weeks ago, a hospital in upstate New York announced it would have to “pause” delivering babies because of resignations among its maternity staff. So the threat of difficult ramifications is certainly real. But on the plus side, your quitting goes a long way toward purging us of the gullible, the conspiracy-addled, the logic-impaired and the stubbornly ignorant. And that’s not nothing.

We’ve been down this road before. Whenever faced with some mandate imposed in the interest of the common good, some of us act like they just woke up on the wrong side of the Berlin Wall. “There’s no freedom no more,” whined one man in video that recently aired on “The Daily Show With Trevor Noah.” The clip was from the 1980s, and the guy had just gotten a ticket for not wearing his seatbelt.

It’s an unfortunately common refrain. Can’t smoke in a movie theater? Can’t crank your music to headache decibels at 2 in the morning? Can’t post the Ten Commandments in a courtroom? “There’s no freedom no more.” Some of you seem to think freedom means no one can be compelled to do, or refrain from doing, anything. But that’s not freedom, it’s anarchy.

Usually, the rest of us don’t agonize over your intransigence. Often it has no direct impact on us. The guy in “The Daily Show” clip was only demanding the right to skid across a highway on his face, after all. But now you claim the right to risk the healthcare system and our personal lives.

So if you’re angry, guess what? You’re not the only ones.

The difference is, your anger is dumb, and ours is not. Yours is about being coerced to do something you don’t want to do. Like that’s new. Like you’re not already required to get vaccinated to start school or travel to other countries. For that matter, you’re also required to mow your lawn, cover your hindparts and, yes, wear a seatbelt. So you’re mad at government and your job for doing what they’ve always done.

But the rest of us, we’re mad at you. Because this thing could have been over by now, and you’re the reason it isn’t.

That’s why we were glad President Biden stopped asking nicely, started requiring vaccinations everywhere he had power to do so. We were also glad when employers followed suit. And if that’s a problem for you, then, yes, goodbye, sayonara, auf wiedersehen, adios and adieu. We’ll miss you, to be sure. But you’re asking us to choose between your petulance and our lives.

And that’s really no choice at all.