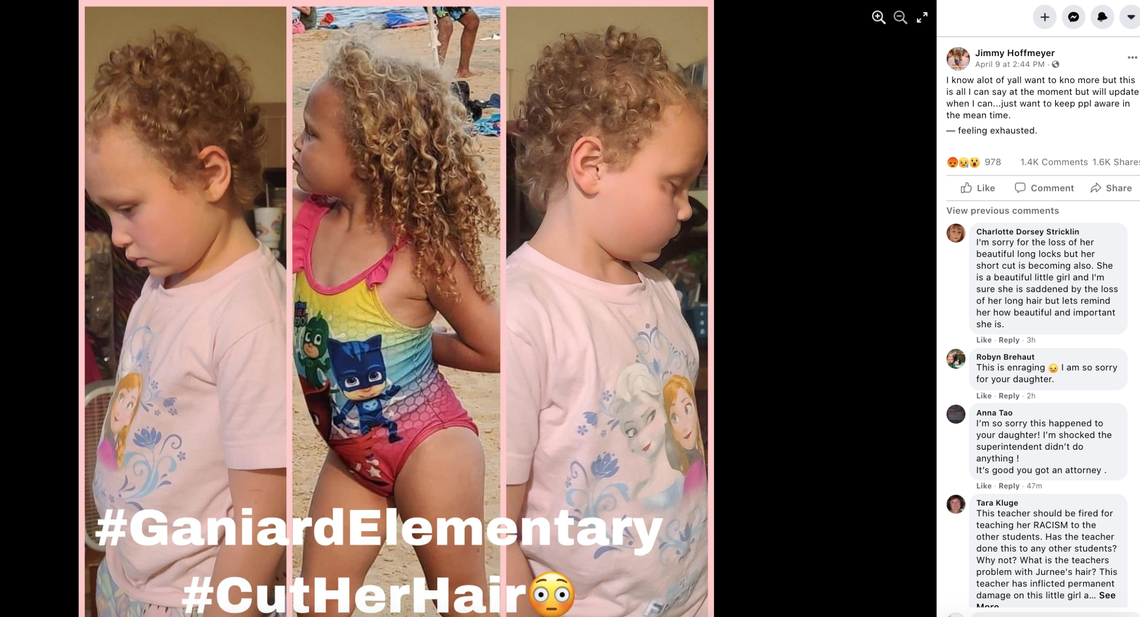 Six months after a 7-year-old girl’s hair was cut by a school worker without her parent’s permission, her father has sued the Michigan school district.

The school did not immediately respond to the lawsuit. In July, the Board of Education reprimanded the librarian who cut Jurnee Hoffmeyer’s hair by placing her on a “last chance agreement,” meaning any future violations would likely result in her being fired.

But the school board said there is no evidence Jurnee’s hair being cut “was motivated by racial bias.”

Jurnee’s hair was cut twice in March, the first time by a female student on the school bus without her permission, according to the lawsuit. Her dad took her to a beautician to get an “asymmetrical haircut,” but two days later, the girl came home with nearly all of her curly hair cut off.

The father alleges in the lawsuit the school’s librarian and teacher assistant, who are white, cut Jurnee’s hair without permission from Jurnee or her parents.

Jennifer Verleger, superintendent of Mount Pleasant Public Schools, said in a statement to families in April that Jurnee was unhappy with how her hair looked and asked the librarian to fix it. But Verleger did note the “unacceptable” actions of the worker cutting Jurnee’s hair without a parent’s consent.

“Rather than declining this request or consulting with the student’s parents or school administrators, the library employee — who is also a cosmetologist — agreed to even out the student’s hair to make her feel better,” the superintendent said in the April statement.

Photos show Jurnee, who once had long hair past her shoulders, with just a couple of inches of hair from her scalp. Christina Laster, director of policy and legislation for the National Parents Union that is representing the family, said Jurnee loved her hair and did not seek a haircut from the school.

Hoffmeyer referred to the school and workers’ conduct as “deliberate indifference.”

“The Defendants failed to properly train, monitor, direct, discipline, and supervise their employees, and knew or should have known that the employees would engage in the complained of behavior given the improper training, customs, procedures, and policies, and the lack of discipline that existed for employees,” the lawsuit states.

Jurnee has suffered “mental and emotional distress, embarrassment (and) humiliation” following the incident, her father said in the lawsuit. She no longer attends the school, MLive.com reported.

Hoffmeyer, who seeks a trial by jury, is suing the school and the two workers on eight counts — violation of the 14th Amendment; deliberate indifference-violation of due process and the 4th Amendment; racial discrimination in violation of the Michigan Civil Rights Act; ethnic intimidation; intentional infliction of emotional distress; assault and battery; and violation of Michigan’s Freedom of Information Act.

The school updated its policies “to help ensure incidents like this do not happen again,” the school board said in July.

Laster told USA Today in July they were disappointed with the response from the school board, who she claims never talked to the father or Jurnee.

“It was a botched and biased third party investigation without the perspective of the victim and the person who was harmed,” Laster said.

‘This is a racial issue.’ Boy punished for hairstyle at Texas school, mom says